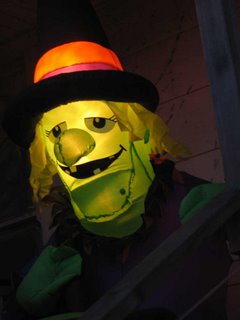 Folks are putting up their decorations for Halloween. One house on Franklin in particular really puts on a show. The old two story house is already creepy enough the rest of the year what with the perpetually closed drapes, peeling paint, sagging porch and lots of house cats sitting in the various windows. Now this! <---

By the way, I discovered why there were no garbage trucks and morning paper delivery during my six o'clock walk yesterday. Around noon I walked to the Post Office to drop off a letter and it was closed, I figured they must be out to lunch. I continued on to my bank and it was also closed but at least it had a sign in the window, "Closed for Columbus Day".

But back to the purpose of my walk this morning. I wanted to walk the length of Franklin Street which is bounded on the north by Pudding Creek and on the south by Noyo Harbor. Franklin Street is only 1.8 miles long and straight as a string from Manzanita to Cypress.

Fort Bragg was a lumber town, therefore the majority of the east/west streets are named after trees but one street, for some reason, was not named after a tree and I will highlight it in the following list. Maybe it was a joke.

South of Cypress Franklin swerves a little, is crossed by South Street and finally ends at North Harbor Drive. North Harbor Drive used to be Highway One. Why one street crossing Franklin is named South Street I have no idea. There is a lot of history I have to learn and walking the streets of Fort Bragg brings interesting questions to mind. I've got my work cut out for me!

Posted by Ron Bloomquist at 7:34 AM