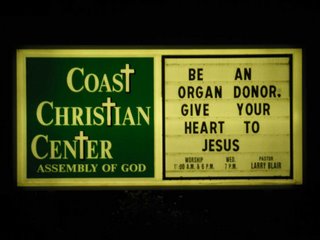 I spotted this sign last Friday but didn't have my camera with me. All weekend I kept hoping the wording would not be changed before I got a chance to photograph it. Sure enough, when I came around the corner from Dana unto Chestnut I could see it off in the distance but I could not tell if the words were the same until I got closer. The message was the same. Perfect!

I could also see Orion was almost straight up in the southern sky. Personally, I have more faith in Orion.

At the east end of Laurel, near Otis Johnson Park, the school buses were being warmed up and checked out at the bus barn before their morning runs. Other than that, it was a very quiet morning. No garbage trucks banging around and I didn't see the paper delivery guy driving around. I was walking at my usual time but they weren't about their business at their usual time. 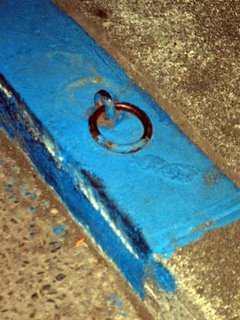 I only saw one fellow walker and we exchanged the usual "Good Morning" as we passed in opposite directions on Franklin. There is another early bird I usually meet on Harold but he has gone missing again. I saw him quite often during the summer and then he disappeared. When I saw him again last week I hollered over at him, "I've missed you!". He replied, "Been fishing in Colorado." The next morning I was going to follow up with the question, "Catch any?" but I have not seen him again.

Since I had my camera with me I stopped and documented one of the horse and buggy tie-down rings I discovered last week at the south-east corner of Redwood and McPherson. Because it is located in a handicap zone of course it is painted blue!

Posted by Ron Bloomquist at 7:48 AM