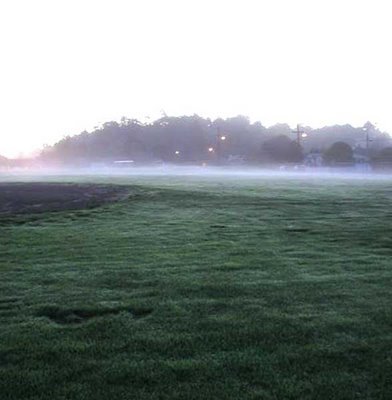 Early morning was spectacular with Tule fog lying low over the soccer field. I just finished taking a photo of it when here comes the walking fisherman guy I have been having one sentence conversations with. We greeted each other and he continued north on Harold at a fast pace. I started to continue south but turned instead and caught up with him. I soon discover he didn’t mind talking but he didn’t want to slow down either. So, north we go up Harold.

I find out he is 72, still works because he doesn’t know what he would do if he retired and he always does the same exercise in the morning. He lives at the south end of Harold, walks to the north end and back. 2.1 miles. Period.

As we approached the north end I said I was going to watch his procedure. Sure enough he reached out and touched the guard rail, turned around and head south. I told him I was wondering if he would do that. He confessed he is very anal-retentive. He has his routine and he sticks to it. I told him what I’m up to, walking the streets of Fort Bragg and looking for oddities. I pointed out one of the square telephone poles as we headed south. He had never noticed it but then, he is walking for his health, doing his morning exercise.

We finished “his” walk at the south end of Harold, shook hands and I headed back up to Redwood, down to Main Street, north to Laurel and home. 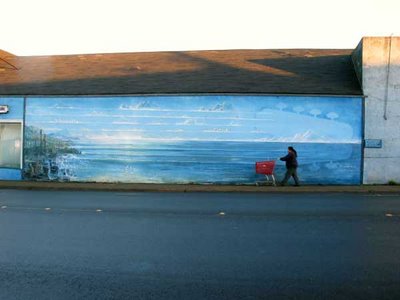 Along the way I passed this mural. I can’t think of any other murals in town. I’m going to start watching for them. 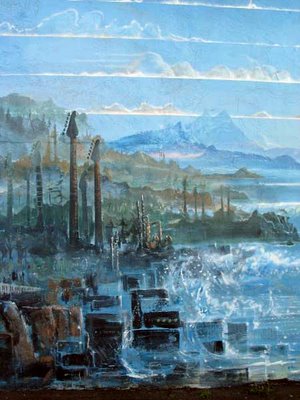 Detail. Very nice.
Posted by Ron Bloomquist at 9:06 AM