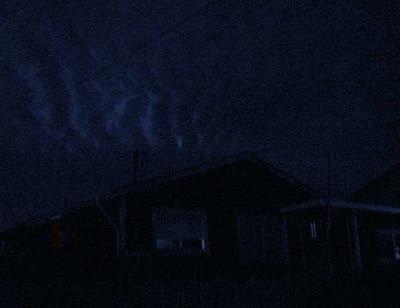 My first walk since returning to Fort Bragg. A miserable performance of only 1.9 miles; south on Whipple, west on Maple, north on Franklin and home. I returned from the Pacific Northwest in time for a major storm, power outage and intestinal flu. Sick, disconnected and discussed. This morning was the first time I was able to roust myself from my bed and even feel like walking further than the bathroom. So this morning I tentatively crept out the door, started walking and was soon rewarded with faintly lit streamers of clouds in the east. Not much, a humble beginning but solstice is past, light is returning and I realize I will live! A new year is at hand. YES!!

While I have your attention let me mention a couple of, what I think, are cool observations. The first one happened outside the "Knead and Feed" restaurant in Coupeville, Washington. My brother and I were going to lunch and while he checked on table availability I got to watching a crow perched on the power lines. A car came down the hill on Main Street and turned left onto Front Street. Just as it turned the crow flew out and dropped a mussel shell onto the road. I have seen seagulls do this trick, dropping a mussel or clam from fifteen or twenty feet trying to crack it open on a hard surface. I thought it was poor timing for the crow because the car almost ran over it. But as soon as the car was past the crow flew down, picked up the mussel and flew back up to its wire. And waited. Soon another car came along Front Street and the crow flew out and dropped the mussel in front of that car too. That car also missed the shell, the crow dropped down, picked it up and went back to its perch. It finally dawned on me what that crow was up to! I have heard of birds using tools, sticks, for instance but this was the first time I have witnessed a bird using a complete car!!

Another item of interest, to me, was the storm we encountered in Crescent City, California. We had stopped for the night at a motel on our way back from Washington State and at about 3:00 AM a major wind and rain storm hit the area. The power went out and we listened to garbage cans and other debris blowing past the motel while the building shook! We ventured out at first light and there was nothing open! City crews were cutting up downed trees and power and communication trucks were driving hither and yon. The place was a mess. I tried to get information about highway 101 south but nobody seemed to know except they "heard it was closed". Finally, around 10:00 in the morning with nothing open and the wind still kicking we decided to "make a run for it".

Soon we were driving through the redwood groves and outside of some duff on the road it was like nothing happened! The "disaster" in Crescent City didn't happen in the woods! Those trees have been through thick and thin for centuries and they are still there. It was actually peaceful and calm amongst the large trees and only wild and windy where we came out along the shoreline. Yes, there were a couple trees that had gone over and had to be cleared but nothing like what happened in Crescent City. Amazingly, we were much more protected in the woods.