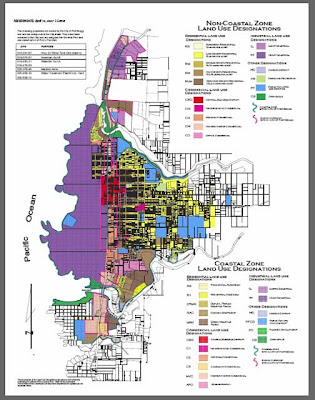 A reader recently posted a comment to my blog:

"Hi there... if anyone would know this, it's you: what are the city limits of FB to the south? I've been on the city web site and seen the zoning map. I still am not sure where the official city ends.
As you walk around have you ever seen a "city limits" sign for Fort Bragg? If not, why not? It would be kind of interesting, I think."

I stopped by City Hall this morning and asked the city planner. He referred me to the map on the city webpage which is probably the same one you mentioned. He said, "If it is in color, it is in the city". Here is the link for a more detailed image. (It is a 2.24 MB PDF file.)

I have walked as far south as Mendocino, as far north (on HWY One) as Happy Lane and as far east as Monson Way. I don't recall any city limit signs but I will pay closer attention now that you ask.
Posted by Ron Bloomquist at 11:55 AM