A year or so ago I heard there was a photo in existance of one of the sea stacks west of the Mill Site that used to have a brothel on it. I asked around. Several people said they recalled seeing photos of it and finally, after making a pest of myself, I got a copy. As you can see there were two suspension bridges out to it. The upper one had a couple of supports to help cut down the "sway". The lower one might have been an earlier version. There are sheets blowing in the wind and one or two people, women? standing by the sheets. It is my understanding the brothel was located on this sea stack because it was out of the city limit but close to town! And I understand it was part of August "Gus" West's holdings. Hence the name. Mr. West owned many buildings in Fort Bragg including the Golden West Hotel. 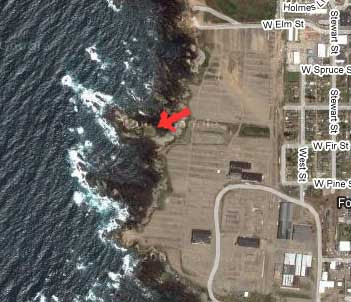 The red arrow points to the "island" pretty much from the same direction the above photo was taken.

I'm sure a book could be written about those ladies and their existance on that island surround by sea, wind and waiting.

I discovered another Fort Bragg blogger, biker, walker and photographer and she has been blogging longer than me!!

Great stuff and well worth checking out. I have added her to my list of favorite blogs links.