I took a look at the Franklin Street project during my walk this morning at 6:45 AM. I figured it would take until about noon before they got to the ring in front of Racine’s.

Fortunately, the other day I had left my phone number at Racine’s with a note asking to be notified if it looked like the sidewalk was on the verge of being torn up.

I hot footed it down Laurel Street and took a look. 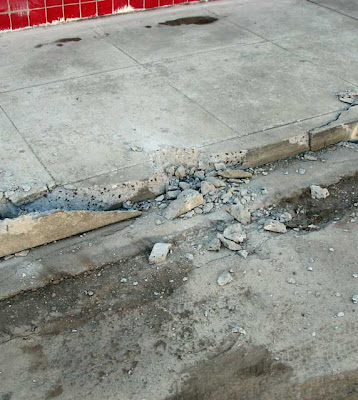 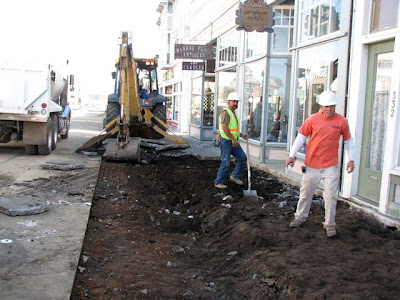 I saw one of the construction guys and asked him what happened to the ring. He said they removed it early so it wouldn’t accidentally get hauled off in the dump truck. He said the boss has it but he is getting a tire fixed on his truck. “He will be back soon”.

I waited around and sure enough, here he comes around the corner in his truck. I ask him where is the ring.

“The woman from City Hall.”

I go to City Hall and ask for Cindy.

“Cindy is out of her office. She is out in the field.”

“Over there on the Franklin Street project”.

“She is rather short. She is wearing a safety vest and a yellow hardhat.”

I zip back to the Franklin Street project and there is the boss and Cindy looking over some plans. 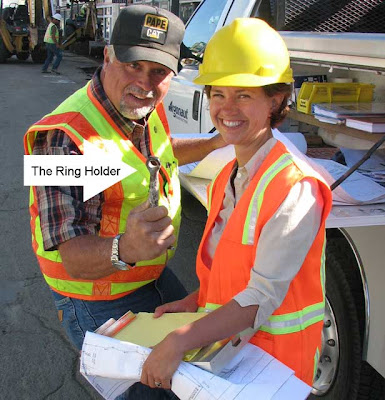 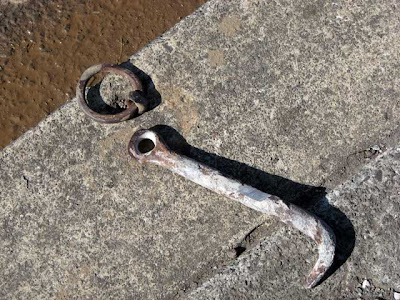 So. This is what it looks like. Here it is placed beside a similar ring located across the street from the Golden West Saloon.

We are going to have a new ring forged for it before the new curb gets poured.