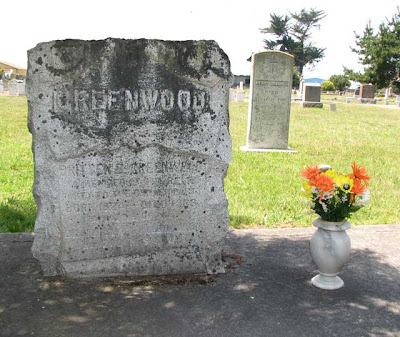 With the help of a few friends I discovered another interesting monument in the Rose Memorial Cemetery.

"Son of famed mountain man Caleb Greenwood and his wife Batchicka, a Crow Indian woman. "Brit" Greenwood gave conflicting information about his age to census takers and voting registrars over the years, but evidently he was born between 1827 and 1830 somewhere in the Missouri River watershed.

"Like other rescuers of the Donner Party, Brit survived the terrible blizzard that halted the "Second Relief Party" at Starved Camp. His feet were permanently injured by frostbite.

"Afterwards Brit settled on the California coast in Mendocino County with other members of his family.

Most interesting having two people involved with the Donner Party, victim and rescuer, only about one hundred feet apart from each other.
Posted by Ron Bloomquist at 11:03 AM