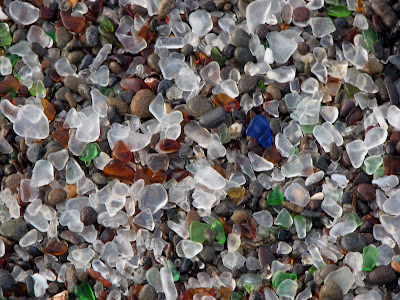 I walked over to Glass Beach today to look around. The following is what Wikipedia has to say about Glass Beach:
***
"On the northern edge of town, along the shore next the fence surrounding the Georgia Pacific property, is a small beach covered in smooth bits of glass. Some are colored, some are clear, some even still bear the traces of blue and white china patterns on them. in some places, there seems to be as much glass as sand.
"In the early 20th century, Fort Bragg residents threw their household trash over these cliffs. They discarded glass, appliances, even cars. The land was owned, at that time, by the Union Lumber Company, and locals referred to it as "The Dumps." Sometimes fires would be lit to reduce the size of the trash pile. In 1967, city leaders closed the area. Over the next several decades, the pounding waves cleansed the beach, wearing down the discarded glass into the small, smooth, colored trinkets that coat the beach today. The area is now frequently visited by tourists, who scour the beach for interesting curios to take home as souvenirs.
"Warning: the path from the road down to the beach is somewhat treacherous, so curious visitors should be sure to wear shoes with good tread. It is not uncommon for unprepared visitors to injure themselves on the way down."
*** 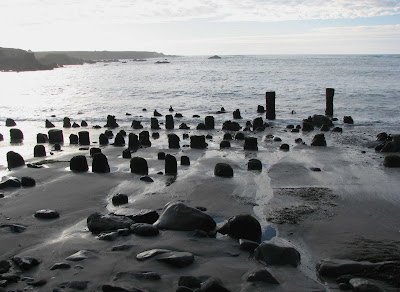 These pilings are all that is left of the Union Lumber Company dock when Redwood was shipped from Fort Bragg by sea. 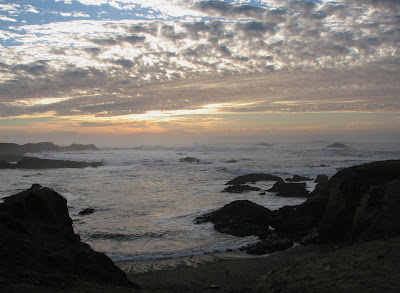 In the late afternoon clouds moved in and 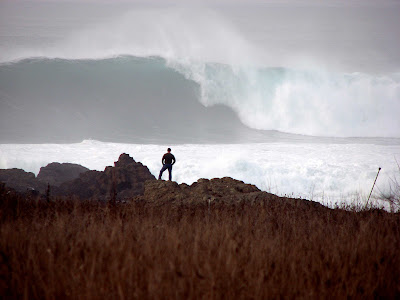 Posted by Ron Bloomquist at 6:26 PM