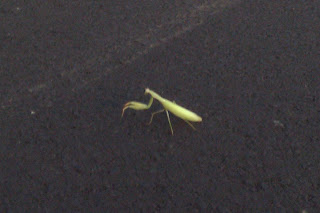 During my early morning walk I spotted this Praying Mantis in the middle of Harold Street by the Middle School.  I have never seen one "in the wild" before.  I picked it up and moved it to the safety of the bushes by the Senior Center where hopefully it will have a longer life.  Unfortunately I didn't have my "good" camera with me and had to "make do" with my cell phone.
Big bug!  The main body must have been over two inches long!
I found this in Wikipedia:

Mantises are exclusively predatory. Insects form the primary diet, but larger species have been known to prey on small lizards, frogs, birds, snakes, fish and even rodents; they will prey upon any species small enough to successfully capture and devour. Most species of mantis are known to engage in cannibalism. The majority of mantises are ambush predators, waiting for prey to stray too near. The mantis then lashes out at remarkable speed. Some ground and bark species, however, pursue their prey rather quickly. Prey items are caught and held securely with grasping, spiked forelegs.

Good thing I got it off the street.  Kids walk right by here on their way to school, which has already resumed this year!
Posted by Ron Bloomquist at 9:31 AM