Our dark night of the soul. 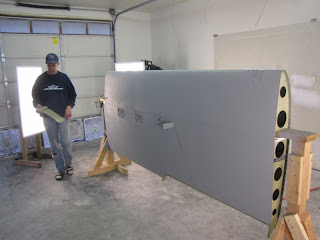 We were finally ready to shoot the right wing.  Primed, prepped and ready. 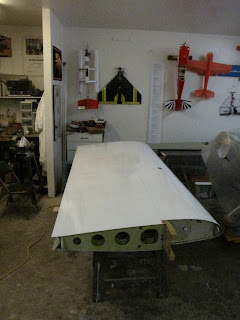 After two coats of base coat white and two coats of clear it didn't look too bad until we got to looking closer. 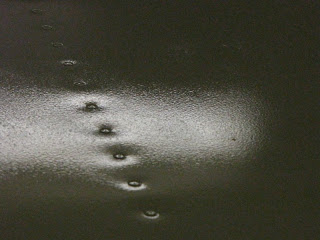 Orange peel!!
Not everywhere.  In fact some areas were perfect but there was one patch of ugly and of course it had to be on the top side and sort of in the middle of the wing.  Not good.
The wind in our sails was dumped and we entered a phase of wondering if we were really capable of pulling this off.  The wing really was definitely unacceptable.  The bad area is going to have to be sanded down and re-shot but the question is.  Should this old man step aside and Jeff find a real painter?
Jeff made some calls, found a real painter who would be willing to come out and take a look but not for several days.  So there we were with not a whole lot to say to each other.  Sort of sick.
We decided to go out to the local airport and look at some planes.  We walked around from hanger to hanger and looked at paint jobs.  By golly, we ain't the only one who has had problems.
We returned home and decided to check the spray gun for "starving" and found some paint build-up in the nozzle area.  We "really" cleaned the gun and decided to go ahead and try shooting the second wing with even closer attention to how much paint we were putting on with the thought to lean towards the heavy side rather than the light.  Heavy could mean runs but light definitely means orange peel.
Girding our loins for battle with our minds right we entered the booth and gave it our absolutely best attempt and... 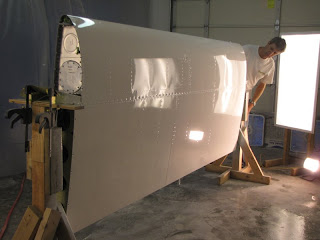 WOW!
We pulled it off!!
We are very pleased.  Confidence has been restored. 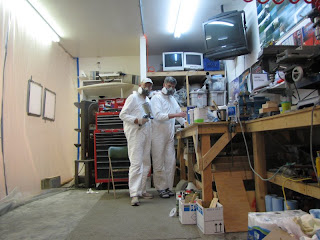 Together again!!
Whoot Whoot!
Posted by Ron Bloomquist at 7:49 AM