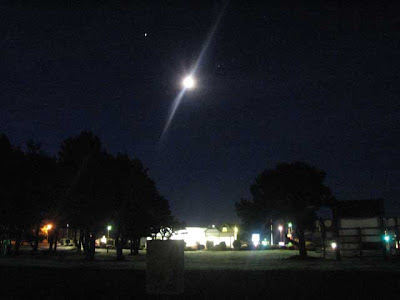 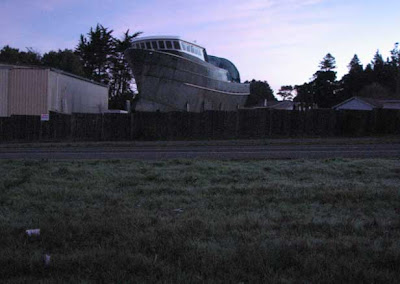 The second reason is because the other day I was driving out Highway 20 and stopped to take some photos of Van Peer’s boatworks. I wanted to post the photos but I had not walked to that location. So, this morning I walked (4.5 miles round trip) and took this photo. The following two photos were taken a few days ago from my vehicle. 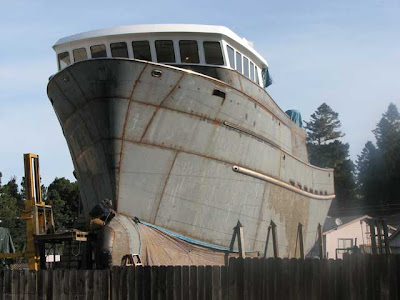 Here is what I found on the web about Van Peer’s boatyard and I include it here because a lot of us locals see it but never know any more than what we see:

Since it opened in 1973, Van Peer Boatworks was known for building quality steel boats for fishermen from California to Alaska, boats like the Spiky Lady, Reality, Spectra and Island Pride — 28 in all, with the last one being the 59-foot Stella. That was before Chris Van Peer closed down his boatyard on Highway 20 in Fort Bragg, Calif., five years ago.

Now Van Peer is back. Actually, the boatyard has been open for more than a year, and this past February, the Jes An, a 63' x 24' Dungeness crabber was launched for local fisherman Tim Estes. Asked why he started building steel boats again, Van Peer says he knew Estes, and Estes asked him to build him a new boat. He decided to go ahead with the project, and now he’s on his second crabber.

In early May, Van Peer was in his boatyard, waiting for a truckload of computer-cut steel to arrive so he could start the next boat. One reason work didn’t start as soon as the Jes An was completed is because of the slow process getting steel from the mill, Van Peer says.

The new boat will be identical to the Jes An. The boat’s owner, Dennis Sturgell of Hammond, Ore., and Estes are friends, and they fish in the same area. So when Estes starting thinking about having his boat built, he and Sturgell got together and figured it would be cheaper to build two identical boats.

Thus they got the same designer, Jensen Maritime Consultants in Seattle; the same engine, 640-hp Cummins KTA19-M3; the same generators, two 120-kW John Deeres; the same 5-inch shafting, and so on, down to stainless-steel plating.

Both boats will have two stainless-steel-lined insulated fish holds. The larger one is 2,120 cubic feet, and the smaller is 1,480 cubic feet. Behind the two fish holds is a 320-cubic-foot bait tank. The holds can be tanked down for crabbing, but for albacore fishing, they will use chilled seawater and spray brine.

The boats have stainless-steel guards and cap rails. The willingness to use stainless steel is one thing Van Peer notices after being out of the business for five years. “Anything that gets any wear at all is stainless steel,” he says.

Since Van Peer has been back in business, fishermen have been calling from as far away as Alaska to talk about having a boat built. 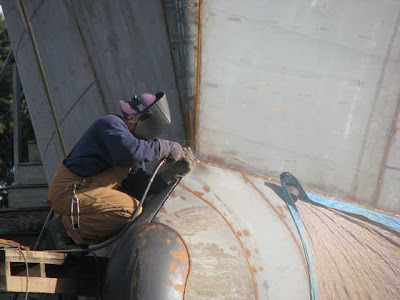 Posted by Ron Bloomquist at 2:08 PM