Oh boy! Oh boy! I stopped by the Guest House Museum and talked to John Skinner who was “on duty”. I asked my questions about my various “oddities”; the horse and buggy tie-down rings, the square telephone/power poles, the obelisks; no problem! I did stump him with the two inset curb thingies south of Paul Bunyan (east side of McPherson between Redwood Ave. and Alder St.). We are going to dig into that a bit deeper. 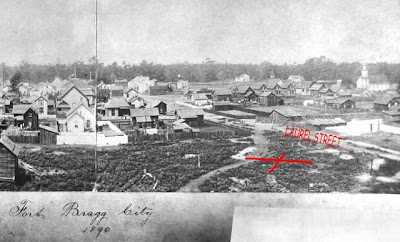 Then we moved to a large 1890 photograph hanging on the wall. (I posted the “diagram” in the February 2nd blog which lists the various houses and businesses visible in the photograph.) Above is a portion of that photograph. I added the approximate location of where I live and the word “Laurel Street” to show where Laurel Street petered out in 1890. The diagonal path coming past where I live is one of the paths kids took on their way to the elementary school (The photo was taken from the roof of that school).

Beyond Laurel and to the far right is visible the First Baptist Church. John told me the bell tower eventually fell over because of rotted timbers and when it was reconstructed the whole church was lifted, rotated ninety degrees counter-clock wise, set back down and finished in a Spanish motif!! The windows visible in this photo now face north! 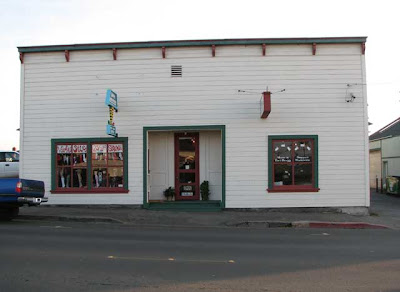 Now, during my walks, I have started taking photos of the various building that existed in 1890.
Here is one. It used to be a livery. Note the curb! Now it contains two businesses, Flo-Beds on the right and “Pippi's Longstockings”, a business that sells socks on the left.
Posted by Ron Bloomquist at 11:04 AM