Assholes in the Park 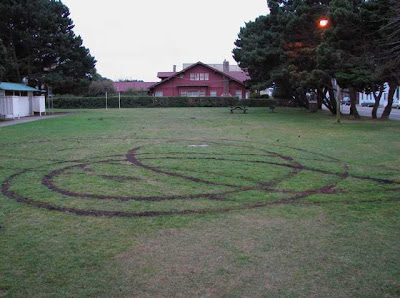 This is the same park I mentioned yesterday, the Harold O. Bainbridge City Park. I live half a block west of it.

About a week ago, around 10:00 PM, I heard a car engine. It sounded like someone tearing around and doing donuts. I didn’t bother to go look.

The next day I walked over to the Library @ the Vets and sure enough. Some assholes had tore up the grass in the park.

So, the other morning I’m doing my morning walk and thinking about those assholes and suddenly remembered the 1951 Dodge four-door sedan I used to own.

I was a year out of the Navy and working at Boeing. I had two cars; my nice car, a 1964 “Aztec Gold” Thunderbird convertible with a black “rag” top and my “beater”, the ’51 Dodge.

The Dodge didn’t have a back seat and when my buddies and I would take the girls for a spin we would borrow two chairs from the kitchen. We would drive into the woods behind the house and tear around running over small trees and doing donuts. It never dawned on me at the time what the neighbors thought. It was all about being wild and crazy. Having fun and scaring the girls.

Forty years later I’m on the other side of the coin. Now I worry about what the neighbors will think.

Interesting.
Posted by Ron Bloomquist at 5:50 AM