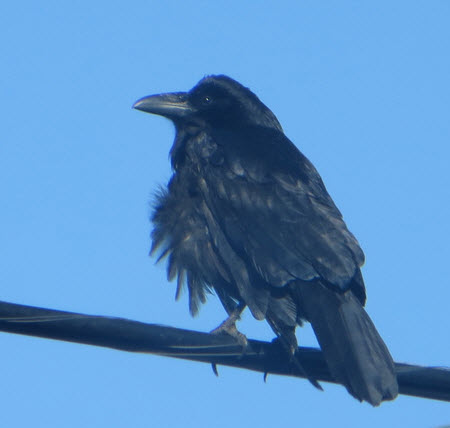 Ms. Scruffy
Funny bird.  She was part of our life for almost two years.  She went missing last Friday and we are surprised at the hole she left.
I became interested in Ravens ten or fifteen years ago.  I read several books by Bernd Heinrich, “The Mind of the Raven” and “Ravens in Winter” and got to observed a pair and their antics when I was camping east of Death Valley.  They are fun and smart birds.
I built a tall feeding platform in our back yard for Ravens and was putting out table scraps for them. They were fun to watch as they tried to beat the Seagulls to the food.
Then, about two years ago, a damaged Raven showed up. 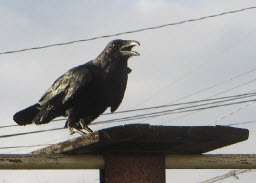 She was interested in the feeding platform but was not quick enough, actually not able, to fly up from the fence to the platform.  So, I made her her own special feeding platform down on the fence nearer the garage.  A platform easier for her to get to and more difficult for “able” birds.  It was apparent her only mode for getting around was walking the phone lines, power lines and coax cables strung from the power poles along the alley to the various homes in our block of town.
Actually Lolli was the first to notice her being restricted to walking because she saw the Raven walking the line from Gregs house to the “light” pole.
As she became accustomed to her special feeding platform we gradually became more aware of what her actual territory was.  She apparently roosted in the pine trees in Bainbridge park, walked the wire to neighbor Greg's house and then on to the “Light” pole, a power pole mid alley that had a street light.  She liked to stand on that street light for hours and observe her “territory”; one square block of Fort Bragg.  A block bound on the east by Harrison Street, the west by McPherson, the south by Redwood Avenue and the north by Laurel Street.  That’s it!  In time we would say, “She is heading for Redwood”, or “She is heading for the Cat Lady’s house” (on Laurel), “The Fig Tree Lady’s house”, (Maria) mid alley.
Several times I tried to follow her to see just what she did all day long but got bored and gave it up.  It seemed all she did was stand around, watch over her territory and groom herself.  Actually, that was about all she could do! 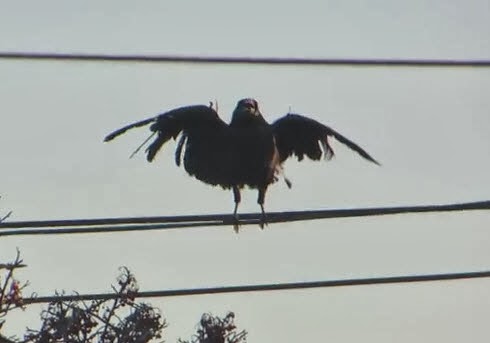 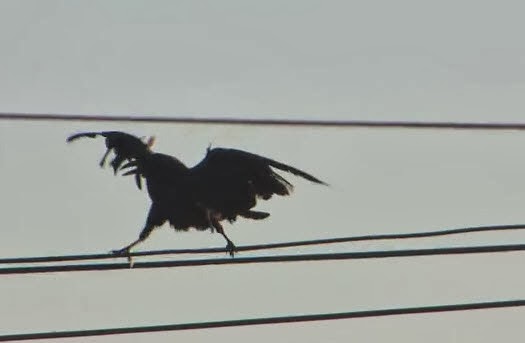 It is amazing how much we miss her and how often we look out the window when we hear a “caw, caw, caw”.

Posted by Ron Bloomquist at 5:28 PM